Increasing productivity with Smart Technology at Porgera Gold Mine 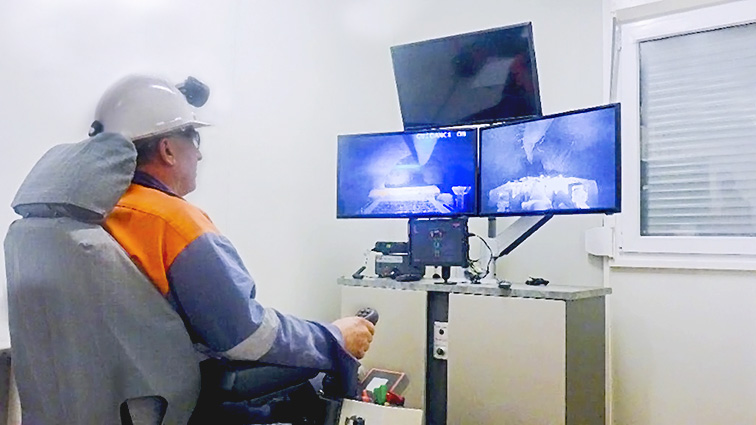 Porgera Joint Venture (PJV) and RCT has had a long history of evolving site remote loader capabilities at the Porgera Gold mine in Papua New Guinea over the years. The site’s innovation journey began with RCT’s ControlMaster® Line-of-Sight and has evolved quickly from there.

The site’s primary reason for innovating was to ensure operator safety and increase loader availability, productivity and revenue while eliminating the need for potential interaction between the operator and equipment being operated. Although already known as one of the world’s top ten producing gold mines, the underground team’s aim was to transport an extra 30,000 tonnes of underground ore at 6.6g/t equating to about US$8 million in extra earnings per year.

To help achieve these goals, the second largest mine in the country decided to upgrade from Line-of-Sight to ControlMaster® Teleremote on the site’s Caterpillar R2900 loaders. This solution allows workers to control the machine via remotes from the comfort of an operator station, located in a dedicated flatpack hut on the surface of the site, about 500m above the work area. Operators utilise cameras and monitors to view the machine, allowing them to operate it away from a potentially hazardous location.

This soon evolved with the site upgrading to RCT’s ControlMaster® Guidance being installed on the loaders which is designed to prevent the machine from contacting walls along the tram of the loader, reducing the potential for machine damage and downtime.

“The use of Guidance Teleremote technology has removed the operator well away from the area of the loader tram. Line-of -Sight served its purpose in the evolution of Teleremote loader operations, but the removal of the operator from the action is preferable,” he said.

“By now evolving to remote operation from the surface we have removed the operator entirely from the underground mine.

“This change is obviously safer for the operator but also provides the operation with increased utilisation as we can now continue working over shift change resulting in an operational efficiency improvement of 16 per cent,” Mr Arnold added.

Having the Teleremote and Guidance systems accessible in a surface control Operator Station has provided the added benefit of being able to operate the loaders during blast re-entry times. As currently on site Porgera are withdrawn from the workings during blasting times, which generally occurs over shift change.

“The amount of time it takes to withdraw all personnel from the mine, clear the tag board, blast and conduct blast entry procedures results in extended period of time when production activities are generally halted,” he said.

“Commissioning of the operator station allows the operator to continue stope extraction during this period and to conduct a hot seat change over with an oncoming shift.”

The implementation of this technology has increased utilisation of available loader time which has decreased the overall bogging life of the stopes and more importantly it has resulted in more ounces being delivered to the run of mine in the same period of time.

“Our specialist haulage trainers are now able to sit right beside the trainee operators while coaching,” said Mr Birseye.

“It has also resulted in more exposure time to one-on-one training as training is no longer dependent on travelling to the stope site,” he added.

For the PJV the initial justification for the upgrade was to capture some of the available but unused blast re-entry time.

“In the first six months an additional 30,000t has been bogged during re-entry time, “said Mr Arnold.

“This is a significant figure considering Porgera underground produces 90,000t of stope ore a month,” he added.

“An additional 70,000t has been bogged to stockpiles and/or ore passes either side of blast re-entry times.”

Payback for the unit was less than a year with an estimated 6,000t additional to be added to the production delivery figures.

“Utilising innovations such as the Surface Teleremote Operator Station resulted in safe delivery of increased ounces without the need to increase fleet, manpower or numbers,” Mr Arnold added.

Barrick (Niugini) Limited ("BNL") is a company incorporated in Papua New Guinea, and operates the Porgera Gold Mine in Enga Province on behalf of the Porgera Joint Venture partners. BNL is an independently managed company and is jointly owned through an equal partnership between Barrick Gold and Zijin Mining Group.

RCT is an innovative smart technology company with the expertise to evolve entire industries. We design, manufacture and deliver technology and service solutions to support clients around the world in multiple sectors including mining, industrial, agricultural and civil. With over 45 years of success, RCT leverages knowledge and insight to provide clients the advantage of measurable value – increased profitability, productivity, efficiency and safety.

Since the 1970s, RCT has traversed all corners of the globe. Our team has grown to 150+ committed people working with clients in over 64 countries worldwide, from Australia to Africa, Asia, Russia, North America and Latin America.

With our unique way of viewing the world, intelligent solutions and backed by exceptional support, service and training, RCT is a global leader in smart Guidance, Teleremote and Remote Control automation solutions for the mining industry.

We continue to listen, see, think, create and evolve solutions that lead to better profitability, productivity and safety for our clients.