RCT's apprentice recognised as one of the best!

Michael, who started with the company in 2004 in manufacturing, now resides in the bespoke project department, RCT Custom where he has been for the past four years.

This department is renowned for thinking ‘outside the box’ and being able to adapt solutions to suit specific requirements and it was here that Michael’s thirst for knowledge grew as the challenges kept presenting themselves.

Coming from an electronics background, the most logical next step was for him to undertake an apprenticeship in a field he saw himself excelling and working in for years to come. In 2015, with support from his managers, he enrolled at Polytechnic West in Carlisle, WA.

“An apprenticeship seemed like the logical next step to broaden my capabilities in my field,” said Michael.

“I was in a role I really enjoyed, however, I craved that deeper understanding about how things worked.”

“RCT Custom revolves around designing and manufacturing components to work on machines so it’s great to have more intricate knowledge of the ins and outs of how everything works.”

“It was great that this option for study was available, I found that I could really get stuck into the course without any other distractions; everything was always fresh in my mind to execute,” he said.

Due to his previous experience, Michael was made exempt from a number of units, which he said was great to be able to concentrate on new and exciting content and material.

“I was surprised to discover how much I really enjoyed the air conditioning components of the course, I found it fascinating.”

Michael said he breezed through the apprenticeship for numerous reasons including, the fact he had a hunger to learn, he worked in an environment that encouraged his professional growth and supported him every step of the way.

“I feel very fortunate that RCT encourages further learning and education,” he said.

“The apprenticeship really allowed me to hone in on my fault finding skills, it’s something I really enjoy doing now.” 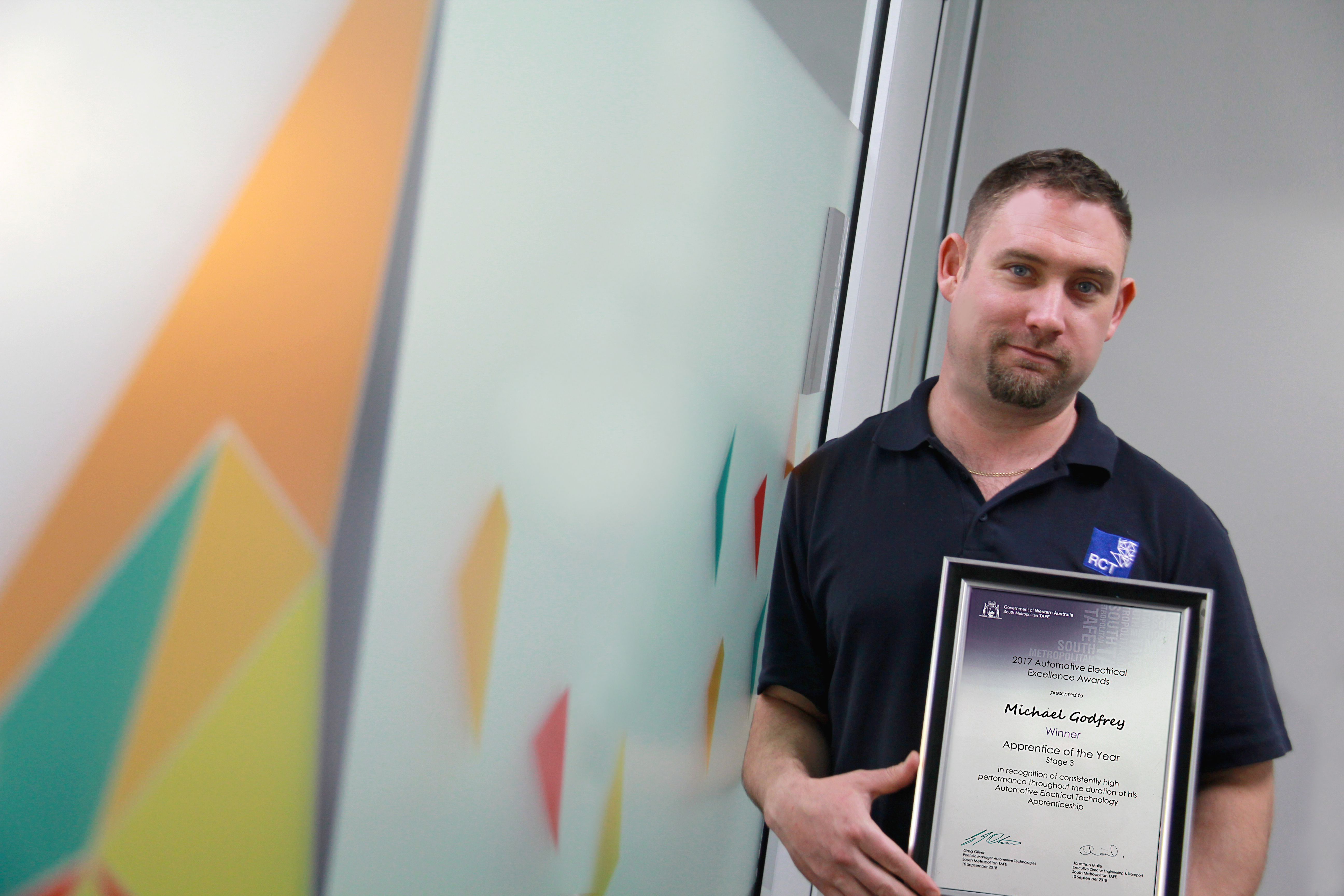 The award nomination came as a surprise to the 33-year-old; still to this day, he’s not sure who put his name forward for such a prestigious recognition and is still buzzing from the win.

“I was amazed, just really happy! It’s a good feeling to excel at something you love and then to be recognised for it.”

Michael was presented with his award at a special dinner held at the Bentley Pines. Not only was the award bestowed upon him, but he also received an Amorphous cell solar blanket for a prize and RCT was acknowledged for its contribution to supporting apprentices making it an exciting achievement for both Michael and the RCT team.

“He was one of five nominees and winning this lays testament to his dedication and hard work which he has applied to his apprenticeship over the past couple of years and continues to do so on a daily basis within the Custom Department,” said RCT Custom’s Projects Manager, Steven Appleton.

Michael said he would highly recommend an apprenticeship through TAFE for those who have a desire to learn and achieve more in the field they are in.

The now, qualified Auto Electrician said “It was a great experience for me and one I’m very proud of. We undertake meticulous projects in RCT Custom so it was great to further my knowledge; I definitely get more job satisfaction from having completed my apprenticeship.”

When Michael isn’t hard at work, helping to make the impossible, possible in RCT Custom, you can find him fixing Hifi, brewing his own beer or rocking out on his guitar and drums.