A new way to control surface drills - concept to reality

There’s a new member of the ControlMaster® family and it is automating surface drills.

Classic red in colour, this creation came about thanks to the Polyus project, but it looks to be a permanent member of the family when it was redesigned to be rolled out across all models of surface drills.

Although RCT has remoted surface drills in the past, the decision was made to reinvent the existing drill console.

“The original consoles were very big and took up a lot of space so we jumped at the chance at redesigning it for the Polyus project,” said RCT Custom’s Design Technician Jayden Rickert.

“RCT are constantly innovating and improving its solutions to ensure we are ahead of the curve and this project was no exception.”

The concept stage is one that involved extensive research and had Jayden reviewing numerous sources for more information.

“The Atlas Copco DML Series drill that the console would be installed on wasn’t available to me here so I had to improvise which was by far the hardest aspect of the project,” he said.

“RCT’s main goal with projects like this is to enable operators to control the machines with the same functionality as if they were sitting in the cab of the machine,” he said.

“There were a lot of factors to be taken into consideration with this project.”

“As technology has advanced, so has the ability to condense our ControlMaster® technology into a smaller console and still have the same functionalities we had previously.”

Once Jayden had drawn up the required specification in a detailed document and he was certain that they were in order, and then the Custom team knew exactly what was needed to carry out this project successfully.

“This included knowing the hardware required to fit out the new drill console, number of joysticks, display, inputs, parts etc.”

The redesigned console consists of multiple joysticks and HMI (Human Machine Interface) which can be used over four different modes to perform 70+ functions.

It was an important requirement that the icons met ISO Standards and that they would translate well to into Russian but also have a universal meaning for future projects.

“Everything that we implemented on this console was to serve a specific function; it was important that we covered 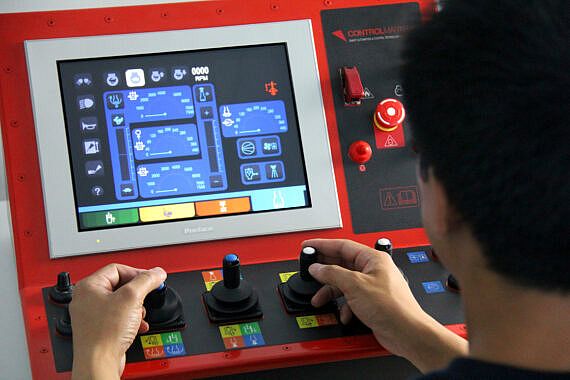 for every eventuality, also to ensure that we had catered to every function and requirement that the operator would need.”

To further ensure operators have the same vision, if not a better view of the operating area, Jayden and the team added a full camera system which includes 5 fixed cameras and pan-tilt-zoom camera which are capable of remote directional and zoom control.

Although Jayden was the brainchild behind the project, he recognised the project was a team effort and it wouldn’t have been possible without the assistance of the Custom, Drafting and Marketing departments.

“In particular, RCT’s Technical Document Coordinator Clint Wilmot and his team – his Auto CAD drawings are so precise, which is exactly what I needed in order to make these concepts a reality,” he said.

“RCT’s Graphic Designer Gemma Twidle helped to create the drill ISO icons and designing a user interface for the console to ensure a seamless user experience, which turned out exceptionally well. It was easy to communicate what we wanted and Gemma had some great ideas.”

The end result was a modernised console that met all the criteria for this particular drill project but also lay down the foundations, to be adapted to various drills for years to come.

As well as leading the design and manufacture of the console, Jayden literally went the extra mile and flew to Polyus’ site in Russia to ensure the successful deployment of the console once it was installed on the drill. Jayden played an integral role in this project from start to finish and his exemplary diligence and capabilities were noticed. This project was a great example of a team member that went above and beyond to deliver our client the best solution possible.

The end result of this project was that the operator was able to match/improve on manual production times. From a safe, clean control station environment free from rock falls, explosives, constant machine vibration, diesel fumes, and dust and extreme weather conditions.